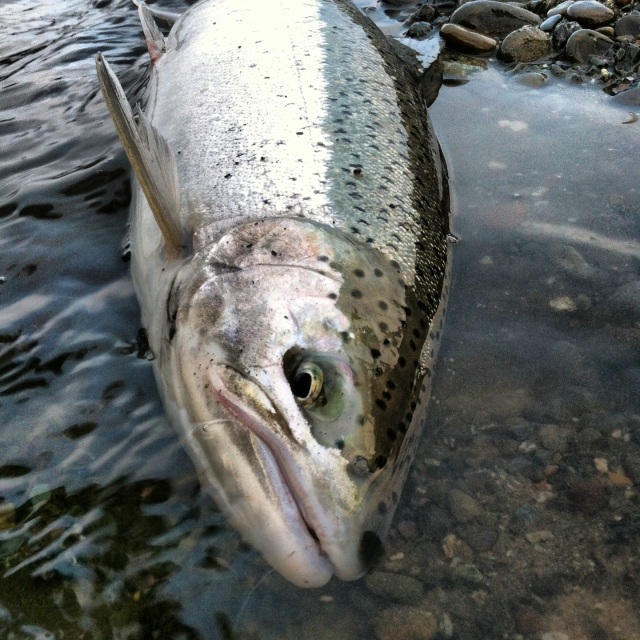 I don’t think any other creature captures my respect as much as a wild steelhead. I’m not referring to the fight it puts up which is immense and arm cramping, but the gauntlet it runs multiple times in its short life.
As soon as they hatch into alevin many are swept away and picked off quickly by other fish in the river, including their relatives. Growing into smolts and becoming food for herons, eagles, and larger relatives before they feel the primal urge to taste the salt. Swimming from a relatively safe river into a large and unforgiving ocean as a small trout seems like a suicide mission, and for many it is.
Traversing pollution, dams, high water temperatures, fisherman, and countless other obstacles to reach the tide water.
Into the estuary with the diving birds, pelicans, seals and sea lions vying for a meal, past the pounding breakers and into the open ocean.
Swimming thousands of miles past predators, fisherman, injury and disease.
Growing larger and stronger in this intimidating and unforgiving world for a couple of years before being called back to their birthplace.
Waiting off the shore for the perfect conditions to run the gauntlet of the tide water – this time as a larger target for the horrors of the beach. An anadromous D-Day.
Past Indian nets, bears and osprey. Up over the dams again, past countless hopeful and jaded fisherman plying their wares, sometimes succumbing to a passing fly and being Mitch Hedburg’d or ending up on a stringer.
Up the creek where they were born, ready to restart the cycle, then return back the way they just came to the ocean.
And unlike their relatives the salmon, they will make this journey several times if they are able.
For a successful fish it’s a life that takes the combination of luck and strength to a new level.

You should feel pretty damn lucky to catch a wild steelhead. Don’t ever take it for granted.