Today I have a guest writer on the blog, a dude I met online named “Doosh”. He’s a real character, and a paid hunting pro. The Doosh is gonna make some guest posts from here on out, enlightening us to all that is the modern condition of hunting.
Today he’s gonna give us a taste of what living the dream is like.

WAZZUP ya’ll? The Doosh here, been hunting since I was a boy and I LIVE for the hunt. Hell, up above of these writin’ words is a pic a’ me and my boys. It was taken last week, not like a hundred years ago, hahaha just wanted to make sure the pre-color TV look didn’t fool ya’ll! HA!  I’m the one with the dead stare and photoshopped eye whites, looking like I give two shits (cause I fuckin’ don’t!) making the Over Armor Brand look fantastic. Fuuckkkk I don’t even know HOW I ever hunted with out my Over Armor, fuckin’ naked? HA! Shit has like 64 different technologies and the tags that prove their worth it. Plus it’s like $900 to get that kit (which I got for free cause I’m the fuckin’ MAN!) and that’s more than justified with the shitty tasting free 80lbs of trophy whitetail meat I’m later gonna throw out of my Sasquatch Cooler cause it tastes like rutted out shit, you see there’s a balance there. I don’t even like venison, I mainly use the fast food, ya’ll. It wasn’t all Over Armor ya’ll, We also used Bendy Bows, Pat Bateman Broadheads, Dead Hooker Scent Blower, Uncle Randy’s Rattle Calls, and were on the 10,000 acre Bait and Wait Ranch, which had perfect accommodations and top notch guides.
Well anyways I got my own huntin’ show, called “Huntin’ with The Doosh”, on the Placement Of Outdoors Products Network, or POOPN TV. Sorry folks, don’t wanna brag or seem like a hot shot, but I got the life. Gettin’ paid to hunt is a dream for any outdoorsman. Don’t get me wrong, it ain’t always easy. There’s a lot of work behind producing a hit show for POOPN TV, and I’m gonna break down a typical hunt for our show.

First off, we pick the destination for the show. We don’t pick ANY hunting destination – none of that fair chase shit, or that backcountry outfitter mule over the mountain sweat fest crap. We only hunt the best pay to play food plot land that nobody else can afford – That’s a big secret, so don’t go mortgaging your shack to come to our turf. We make sure that these animals are conditioned to humans and as well fed as possible. Ricky down below my writin’ words here at the Bait and Wait Ranch gettin’ two birds stoned at once –

Once we got the location ‘scouted’ we usually kick back the night before with five 30 packs of oh so delicious Bro’s Draft Ale Lager Beer Light, who are so kind to bless the show with never ending 30 packs much like Jesus would have wanted. The cans have TM’d ‘CrushQuiet-ShooshCan!’ Technology so you can crush your can and put it in the bed of the UTV without scaring the deer off of the food plot, plus the cans are cammo so you can put some down while waiting for that trophy buck, and he ain’t gonna be none the wiser.
We usually load up the UTV for the 700 yard trip from the 6 bedroom cabin to the food plot like this:

Them Sasquatch Coolers? Yup, you guessed it, full of Bro’s Draft Ale Lager Beer Light. Extra fuel for making new trails in the forest, hammock for relaxin’, and that dog, well, that dog is fer pettin’. He’s Gone Duckin’ Trask Boy Jr. III National Champion Lab (TM).
Once we have the supply UTV out there, we load all the coolers into the FatNLaze (TM) Blind on the back of the other UTV. Then it’s business time, paint the hell out of yer face, crack several cold ones, and wait. 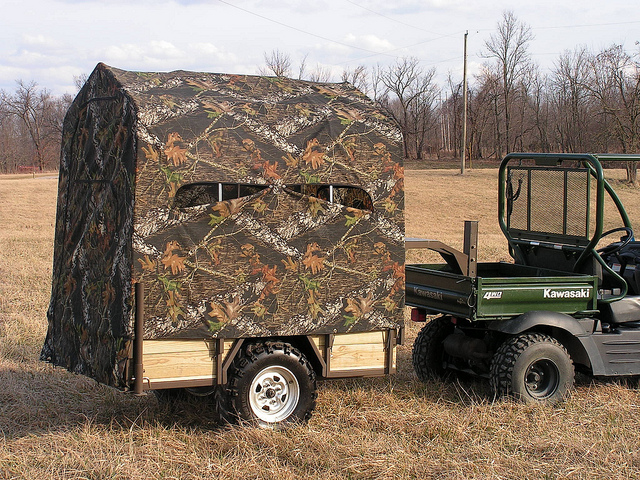 While we’re waiting we tell stories in the blind, and I had A GOOD ONE on the last hunt! HA! When I was a young huntin’ boy there’s this movin’ picture that came out called “The Deer Hunter”. I thought it was gonna be a theatrical movin’ picture about huntin’ big ass bucks, ya’ll. But shit, it was some flick about weirdos like my uncle Burt who went to Nam and can’t hold down a job STILL. It’s been 40 years, Uncle Lazy Ass! 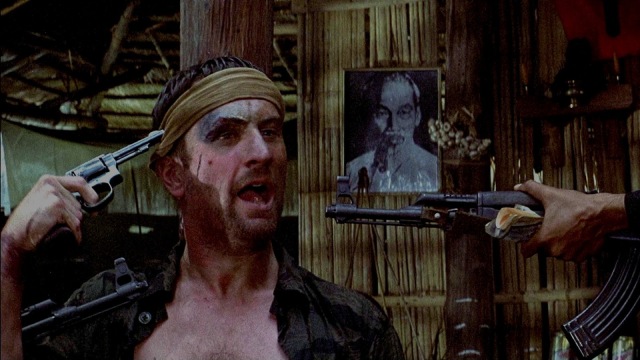 It usually only takes a few minutes for a trophy to walk into the field, and the guide tells us to shoot. so story time ALWAYS gets cut short and it’s all rednecks on deck! HA! Then I do my trademark and put my AR-15 out the wind’er and let a few rip. Once we drop that disgusting pile of fur, we have the hired help gut it and we make our way to the photo shoot with the sponsor crew, where I grabbed a bow so I looked extra bad ass, but you already saw that pic ya’ll.
We’re usually done (and pretty well buzzed) by 8:30 AM. That’s when we go back to the cabin and do voiceovers, and sample clips of “HOLY COW!” or “YEEHAW!!” or “What is he THINKING!?!” and other samples we can plug in for the pre-commercial outros, keep you dummies err awesome viewers coming back.. Than we wait till the light’s good again when the suns just about gonna go to bed and go do more photo shoots with another dead deer we shot off the porch.
See, it’s a tough life.
Now I’m gonna give you a few PRO TIPS, sponsored by Pro Tips Condoms.
1) You can never have TOO much gear. Even the gear you bought last year is already out of date. That crap goes straight into the trash and you go straight to the World’s Foremost Crapfitter and drop your daughters tuition on new camo threads.
2) Get Rich or Get Sponsored – You need a lot of money or sponsors to hunt like we do, and to find the pride and satisfaction we have you’re gonna need deep pockets. DEEP POCKETS.

That’s it for now folks, but the dirty hippy who runs this web pager wants me to come back with more Doosh Tips.

10 responses to “Huntin’ with the Doosh!”