In the back room of a bar somewhere in North Dakota there was an 80th birthday party for one of the towns many lifelong residents. She was a woman roughly polished in her youth by the Depression and her face matched the strained flat board patina of the leery drunk building we all embodied and comforted in. I was the sole stranger in a flattened land that featured only 90 degree turns on roads otherwise too straight for birds to follow, picking my way through the treeless landscape as headwinds forced insanity while I pedaled slowly for the distant Atlantic. I had a nervous breakdown that morning and sat rocking slowly in the bent grasses of an abandoned field, wondering why the incessant and unbroken wind taunted my ambitions and why the hell I was pedaling a bicycle across a continent in the age of sparkly stewardess’ and digital automobiles. Why would anyone want to drop everything and subject themselves to months of this mindless abuse from the elements? I looked to a large boulder at the edge of the field that had the words “Are You Right With Jesus?” spray painted in the center of a hand painted cross. One of several religious rocks graffitied in the state. “If only god were alive to see this..” I mumbled into the wind, the words floating back the way I came. 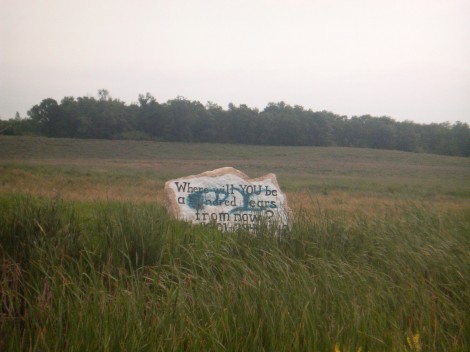 Not the same rock, but the only example I have.

That evening I left my camp in the town park dedicated to lost heroes of wars I’ve only imagined and sought shelter within the bar that seemed to lean against the prevailing wind. Perhaps they built it that way so it would right itself in time, perhaps it shifted against the breath of it’s mortal foe in an act of defiance. I walked in with little notice even though I probably stuck out like a sea monster in a swimming pool. I took a seat at the far end of the bar and listened to the family in the back room celebrating warmly, as if this were their living room on Thanksgiving. They probably came here after weddings or burying people in one of the segregated catholic or protestant cemeteries, for celebration and solace. When the packed bar cleared out to the back room, one man at the opposite end of the bar was squinting at me and rocking like a drunken dingy. After yelling “HEY, WHO THE FUCK ARE YOU?”  he got up and shuffled towards me slowly, walking as a barefoot man would around a fallen Christmas tree. I grabbed my camp lighter from my pocket and squeezed it hard in my right hand, ready to level this drunken Ren and Stimpy human character and high tail it out of town… on a fucking bicycle? I took a breath and he came past me and sat on the corner of the bar. “Name’s Gary, who the fuck are you?”

He turned out to be the local friendly drunk, a delusional pussy cat I easily related with. He went on to tell me about being a tunnel rat in Vietnam, wrestling the great Urple Panurple in some strange wrestling league, playing in the band Bad Company, touring with the Cru, how to escape from the police “close your eyes, and tell them you’re just resting.” He told me about getting locked in Alcatraz with Clint Eastwood and escaping using only a penny, although he trailed off and lost his thought before explaining how he did it. To top it off he signed a blank check and slid it to me, “In case you get into trouble..” And he ended every story by flexing and slapping his bicep and screaming “LET ‘ER RIDE, LARRY!! LET ‘ER RIDE, MAN!”

Gary. The best townie of all time, WBA CHAMP.. hat.

Here’s some footage of Gary and North Dakota, courtesy of Mike Ambs and For Thousands Of Miles

After noticing several beers getting slid my way by passing patrons who felt bad I had been cornered by their highly creative towny (one guy came up and handed me a beer, whispering “You know he’s full of shit, right?”) two younger and prettier girls came and grabbed me during one of Gary’s frequent bathroom breaks. They were cousins, and the granddaughters of the woman being honored. They introduced my drunk ass to all of the family and sat me at the large back room table to play a game called Liar’s Dice.

One of the girls, and part of the fam at Liar’s Dice.

I had never heard of nor played Liar’s Dice, so after a quick explanation I jumped in and bullshitted my way through it, never quite understanding the rules as shots were produced and rattled around. I ended up being one of the final two players out of about twenty, and was facing the father of one of the cute girls who rescued me. I fucked up and he beat me, at least that’s what I think happened. I still have no clue how that game is played, but judging by the name and my talent for it I am not a man of good character.

Once things were wrapping up at the bar I was chatting with the girls and they agreed to take me for a walk around town. I hadn’t seen a cute girl for almost a month so my intentions weren’t the best. My mind drifted to a tight sleeping bag in the veterans memorial, sharing a fleeting love like many of the men honored here had before moving to the front. I had one move to pull and it showed my lack of gratitude, more so my rusty game. “You girls wanna climb the water tower and make out?” Good call on the heathen west coast, bad medicine for Lutheran farm girls from the Bread Basket. They were both in big city colleges and free upon the world, but I knew my way through the gauntlets of church girls, a game I had become proficient in growing up amongst the baptist church beauties of my youth. But Lutheran girls were a bit harder to crack.

“Uh, we haven’t done that since high school. We gotta go back to grandmas and get some sleep for church.”

I walked alone back to my sleeping bag and felt like I had been transported back in time or to a backwards universe from heathen California and the forsaken west. Perhaps god was still alive here, rapturing these sweet girls from the sun-drenched foul smelling spandex monster intruding their land on two wheels and seeking debauchery above all else. This trip was my declaration of freedom, and I didn’t know it before this night.

The following day I pedaled onward to the east, against the wind once again. I bought some fireworks and a butane torch lighter so I could touch them off while riding my bike in the wind. I shot bottle rockets at deer, dropped small rolls of firecrackers when dogs deemed me too close to their territory and gave chase. I threw an M-80 from a bridge and nearly scared a fisherman half to death, I didn’t see him and felt bad for ruining his hole, and yelled “Sorry, heathen passing through.”

I camped behind an abandoned farmhouse that night and explored every dilapidated corner of the building. Baseball cards from the 20’s. Rotten corn husk dolls with soot facial features. Hole ladened coats still on hangars in the closet. The lives of people I’ll never know laid out before me as I passed through as quickly as they left this place. I drank a pint of vodka and a nearly a six pack of beer before I drug an old cabinet out back and put 4 duct taped M-80s in the drawer and taped it shut. I dumped half a bottle of camp fuel on it and the other half on my torch of Heraclitus – a religious pamphlet found near the porch depicting forgiveness and promises no one could keep. The pamphlet sailed brightly through the air and landed at the foot of my youth and set about consuming the craftsman’s last work. The whole cabinet went up in seconds followed by 3 quick bangs, the 4th M-80 flying towards my feet before bursting near my toes. I laughed and cried at the same time, the Lutheran girls somehow shaming me 100 miles away and the forgotten farm ghosts cringing behind me. It burned down quickly and I pissed on the coals to keep my presence hidden from the two cars that would pass that night. I watched the Milky Way part the sky and turned my face towards Maine. I thought of the guilt in the ashes below me and the things I had left behind on this journey – a misled youth spent listening to people who care about the wrong things, a shitty office job, and a caged existence.  I finished the last beer under the untainted stars and imagined what the days between here and the Atlantic may bring.

7 responses to “Bike Touring Tales #3 – Giving Up the Ghost”