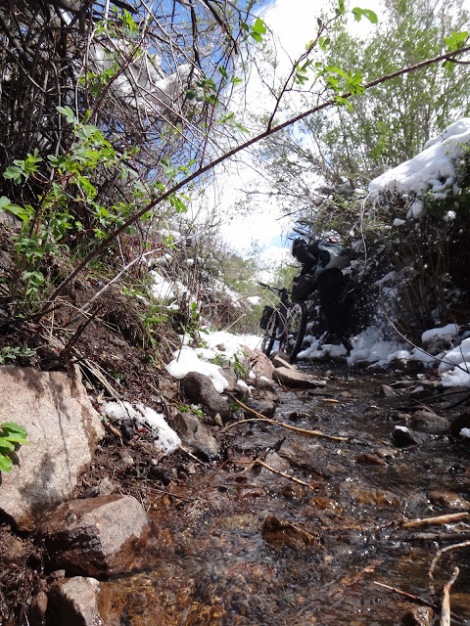 10 hours and 38 minutes. That’s how long it took us to cover 38 miles riding bicycles. Well the term “hiking” is more accurate, the classic “Hike-a-Bike”. The first 23 miles took us 8 hours and 30 minutes. The following is a sample of what I like to do for “fun” when not fishing or hunting. See other “Bike Touring Tales” on this blog for further proof somebody is asleep at the job in my brain basement.

And if you know where we are, please keep it to yourself. Call me selfish, but I want the magic to last.

We drove over the last summit baring our view of the range and both squinted. Our Memorial Day weekend romp through one of the most remote and high ranges in the Great Basin was at stake, and it didn’t take long for us to see through the steam rising from the tarmac and the mist in the valley.  A massive blanket of snow has draped the entire range from the crest to near the valley floor thousands of feet below. The night before we were eagerly watching the storm and searching for reliable snow and weather reports in this sparse corner of the Big Empty. What we found online wasn’t enough to dissuade us from making the long drive out to have a look for ourselves, and have a look we did. 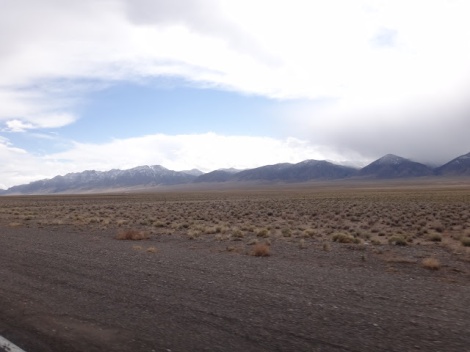 The route we intended to ride was a sparsely used and almost unkept trail along the crest of this range, about 140 miles and 5 digits of altitude for the majority of it. We were planning for 2 days to complete it on our singlespeeds in preparation for the Colorado Trail Race, a hellish and draconian test of human limits that chewed us up 3 months later. If you don’t know what the CTR is, check the link. It’s a doozy.

We reached the tiny town nestled by the range and the streets were rivers. The power was out and there were a lot of people stuck in the bar, waiting for power so they could use the gas pump and get the hell out of Dodge. The day was warm, but the amount of snow still on the ground was disheartening, and we had to almost double elevation just to get on our route. We had a burger at the bar and weighed our options. We decided to check out the opposite end of the range, the “Dry Side”. That end of the range had a lower start that climbed more gradually to the crest, so we imagined that spending the night down there and starting the next morning would allow the snow to melt as we ascended, hopefully allowing us passage on our intended route. 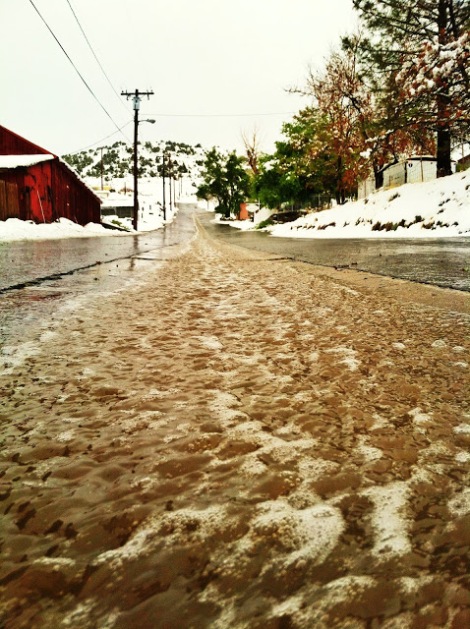 We drove a couple of hours to the far end of our route, and spent the evening plucking brookies from a creek by hand.

We got a few for dinner and headed back to camp, wondering if the late snow and warm weather would subside enough to let us into the high country in the morning.

We woke up early and packed up camp quickly, leaving all non-bikepacking items in the truck, and we set off up the gradual canyon toward the crest. 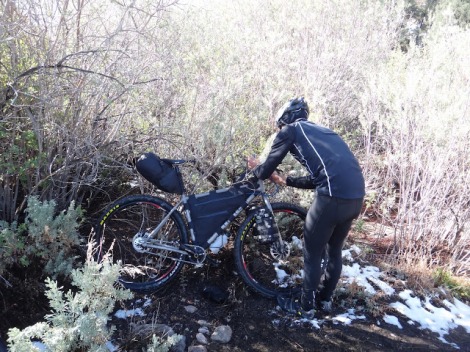 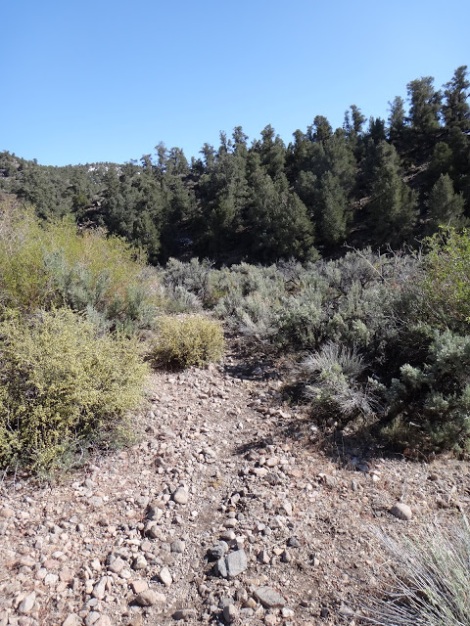 The beginning was tame, and the ground nearly dry from the deluge two nights prior, but the peaks looming ahead told us this wasn’t the rule. Fearing we wouldn’t be able to do our intended route, we hatched a Plan B the night before. A shorter loop in the bottom portion of the range that would only take us to just shy of 9,000 feet and back down to the valley. This 76 mile adventure seemed doable, and we thought it may be done in a day. But as we climbed ever higher the mountains indelibly dictated our destiny, as they are oft to do. 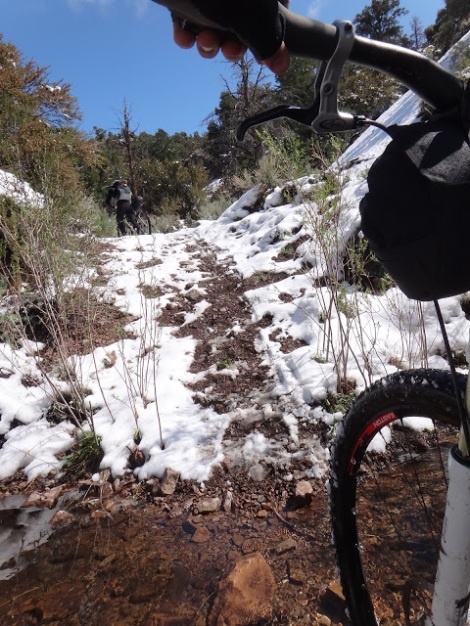 The snow began in the shade, moved to patchwork, and ultimately covered the entire landscape, sometimes up to thigh deep in the drifts.

The bikes, which were loaded with about 20lbs of gear, became easier to carry than to push. 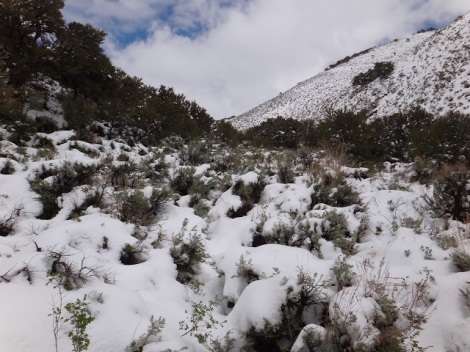 Finding the trail was interesting at times. At least we were confined in the canyon. Right after this photo op a sage grouse almost gave me a heart attack, and a couple of chukar were running around like they were as confused as we were on how to navigate the first weekend of summer.

After about 4 hours we made it to the pass that would drop us down a nice canon to the west of the range. We stopped and ate lunch at an old and regularly used deer camp full of success. 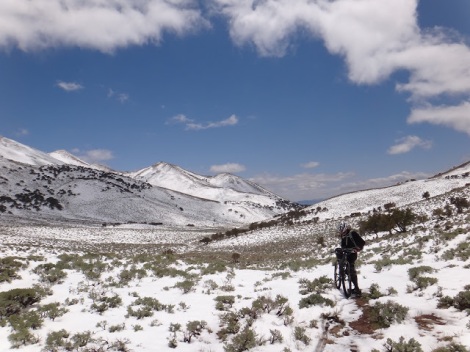 Looking from the top of the pass back the way we came, and happy to be in fast melting and shallower snow. 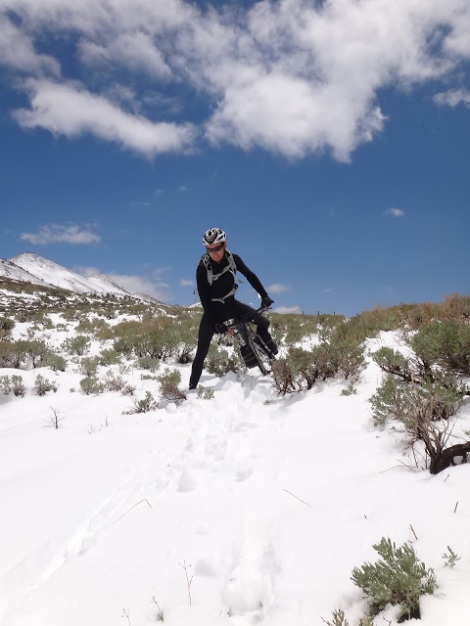 We tried to ride the trail down, and this happened a few times.

We stopped at a dry rock outcropping to warm our frozen feet up and have a snack. Our original route would have taken us through the peaks in the background. 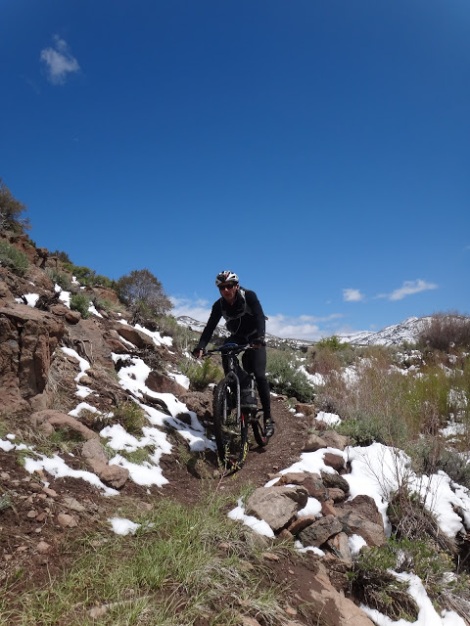 We actually got to ride some good singletrack for about a mile. Then we had to plunge into what we will forever call Hell Canyon. We had to walk down a large creek filled with runoff down a tangled and nasty canyon for the next 3 hours.

This was the start of Hell Canyon, and we were both too busy freezing and being slightly agitated for many pictures to be taken of this shit show. The water got deeper and larger, colder and harder to navigate.

I did find these cat tracks on the bank, and wondered when the bastard would spring us. It probably felt too sorry for our dumb asses, and didn’t want to infect itself with our idiot fever.

When we finally emerged on the dead end of a road we refilled our water in the Hell Canyon creek and reset the brains. Time to get over it, there’s riding to do. We took off on the new road, which was packed well and in good condition.. for about a mile. Then it turned into this as we slogged over the second pass at a near walking pace. 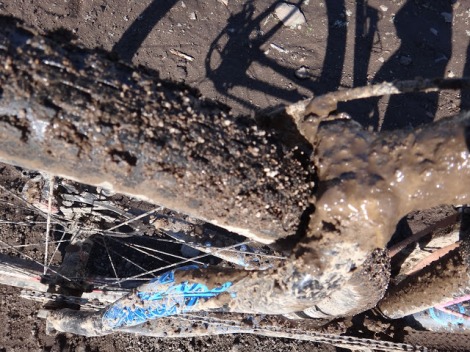 Typical “Great Basin Gumbo” is know by many Nevadans, chukar hunters especially considering our season and habits. But riding a singlespeed bike up Gumbo Pass made me feel a more intimate loathing for wet dirt than I knew possible. 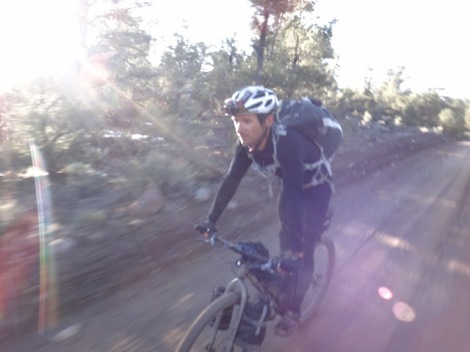 We crossed the pass as the sun was fading, and were treated to a sublimely fast and packed dirt downhill for almost 12 miles. It was fun to fly down a mountain range after 8 hours of scrambling. The look on my face says it all. 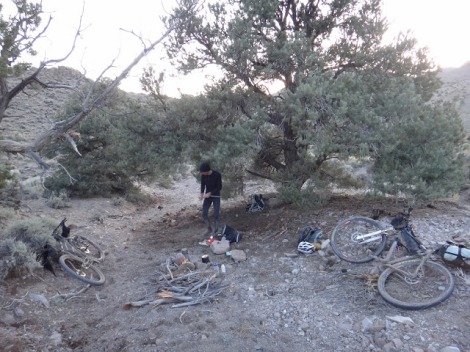 We dropped to near the valley floor and set up camp in what we surmised to be the toilet for every wild ass and donkey in Nevada. 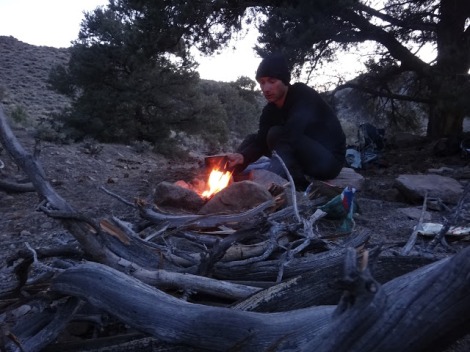 Jesse’s face also says it all, and a double ration was inhaled before we crawled into our bags.

The morning brought almost summer like temps, and those Nevada roads that seem to never end, and never have people on them. I don’t think we saw anybody for the first 3 hours.

The desert is a circle.

At least we knew we weren’t the first people to give it a go here. Old Basque homestead. 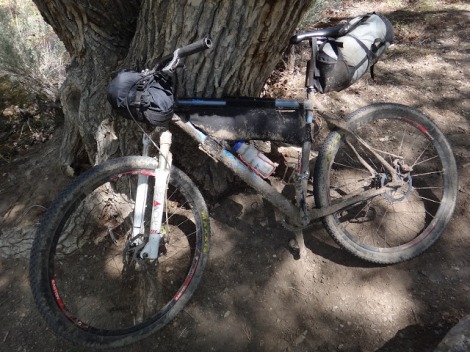 We made it to the spring just below the truck after 4 hours. In those 4 hours we covered the same distance we covered the entire previous day. We washed ourselves and our bikes in the cool water, rode up to the truck, and found ourselves back in civilization..

If that’s what you want to call it.