I woke up six minutes before the alarm went off. The slight aurora of 4:54 AM meant that I should have been looking at 3:54 AM. It was still dark but not nearly dark enough for us to get into our glassing spot before the sun. We slugged down some coffee over-percolated to perfection the night before and headed up the hill. My legs were stiff on the incline and my body pulsed like it hadn’t been used in months. I had contracted some sort of devilish illness a few days prior and it cut me down to the tune of 12lbs in the previous 48 hours.

Those two days of miserable evacuation and fever dream were a fitting end to a month of lows and lulls, getting down and out, dark and twisted, rash and reckless. Things got a bit weirder and deeper than I care to admit, but I’m back now. I didn’t feel human again until I rolled down the window and felt the brisk currents of Harrison Pass swell around me, embracing me into the high lonely order I recently felt so disconnected from. The company of two good friends who share that deep reverence for this place made my comeback complete. I had one of those moments where you don’t realize it until much later, when all the bullshit disappeared. The petty internal voices drown out in a desert ocean. The twitching face stretching long and tranquil. I don’t believe in God but I do believe in self-forgiveness. Not just looking in the mirror and satiating an ego. It’s about being pulverized by a billion acres of open air, sand, sage, granite, sulphur, pinion. You are an insignificant smoothie of carbon and water, a talking walking fucked up stain of genetics distilled by chance. The constructs of society that I placate and damn at once mean nothing here. The sordid attitude that stems from that conflicting line I walk is nowhere to be found. The cracking of fresh beers, the leveling of a spotting scope, and the scrutinizing slow motion gaze of a land unbroken by the hands of man are all it takes to wipe the slate clean. We crossed the pass and my heart began functioning as intended.

We walked up as the tops of the range to the west began to sparkle. We reached the first glassing ridge and spent an hour revisiting the aspens and thickets we scrutinized the evening prior. We spotted several does and a murder of crows we put to bed the night before. Over the next couple of ridges we slowly made our way, and glassed some of the best looking elk country in Nevada. We didn’t see a damn elk. Found some old sign, 20-30 deer, cattle above the treeline, and about 500 sheep being herded on the lush ridgetops. We moved around for the rest of the trip and glassed likely areas with no elk showing, but we did gain knowledge of new areas and access points.

It was productive for a scouting mission but we didn’t find a single animal. It was one of the few times that I can honestly say “it was just good to be out here.” That phrase gets bandied about like it’s going out of style. I know the feeling from personal experience as well as seeing seething burns in the eyes of others who have been skunked, blanked, stomped, lost, forgotten. It’s spitting through your teeth when you get blanked at a place you fish or hunt often, especially when you have the luxury of time. When I used to fish 300+ days a year I really hated that saying. Now that I’m an COUGH adult (in theory) and I can’t go have fun every damn day being out there really is enough.. sometimes. And after the month of August it was the best medicine anyone could have prescribed.

Sitting on a quiet ridgetop in the high country, watching every slow moment pass and time itself change. The shifting light of ridge and cloud spanning vast distances and microclimates from the barren rock and lichen alpine tops to the thick grass and aspen valley bottoms. The bump in heart rate when your friends see something and direct you toward it, even if it’s a rock. Watching crows glide updrafts a mile away in a spotting scope, effortlessly conquering mountains with a pull of a feather.

It would have been a bonus to be stuffing my face with elk ribs as I write this, but that will have to wait. The distance will close between the elk, the season, and myself while the anticipation and anxiety rise. It’s always more satisfying after a few tries. At this point it’s nice to feel human again. And I thank my friends and the mountains for bringing me back. 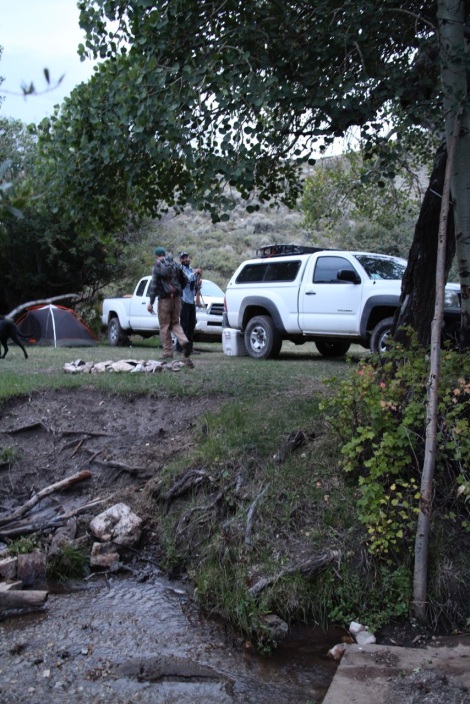 4 responses to “Coming Around”