I could tell you that I’ve had a lack of posts lately because I was “busy.” The truth is that I actually was “busy”, but I’ve had time to make posts on here. I’ve had time to hunt most of the day on my days off and come home and nap and watch Netflix. I’ve had time to tie flies and get drunk around the XboX my roommate drug home with murder games.

“Busy.” The word has become such a bitter sound when vaulted into my ears in casual conversation. It’s become a glorified humble brag and a social out at the same time.

“How you doing bud? Long time no see!”

“I saw your instagram posts last week about your three day fishing trip.”

“Yeah, that was a nice break, but besides that I’ve been sooo busy!”

“Yeah man, your tweets about watching hockey in your underwear all day gave me that impression.”

Obviously, I’m not good at “friends”, but that’s another conversation.

The glorification of always having something to do is pervasive. Nobody wants to be seen with idle hands these days. The unwritten forbidden stigma of taking time to do nothing at all or to do something viewed as unproductive has caused the word to be used as a security blanket stretched large over your day nap that reads “Success”.

Can we pass by friends on the street and say “I haven’t done shit all day. It’s been awesome.” and feel good about it?

I have been working myself silly, I have been sucking the waning marrow out of the hunting season every chance I get. But no matter what has been transpiring I wouldn’t drop a “busy” bomb on my friends.

Can we be honest? Can we say “I’ve been feeling shitty for no good reason” or “I feel like I’m on top of the world since I got these new synthetic underwear.” I sure hope so, especially to the ones we call friends, acquaintances or passerby.

I was busy the last month or so, but I had time to do the things I love aside from writing. Sometimes you need to take a break and reload the hopper, reevaluate your words and the way you use them and attempt to put them to use in a fresh way. I’ll try not to be too busy now that the most glorious time of year is winding down and I’ll be left with nothing but memories and longings for October. The cannon is full, the fodder packed, I just need to feel right about lighting it off.

I spent the last five days swinging for steelhead on a remote river. I was so close to the ocean I could see and hear the breakers over the sandbar while I sent hopeful casts one after another into uncertainty. I hooked two and lost two, but I wasn’t too busy in the 10+ hours I spent on every one of those five days to not relish on how lucky I was to be there. How lucky I was to be swinging flies for dime bright fish who were too busy attempting to run a gauntlet of death to procreate rather than make my heart explode in elation by holding one in my hands. Being a wild steelhead on a mission truly qualifies as “busy.” I’m just there to inconvenience them and add to their work load.

At least my buddy Danny got to pull them out of their stubborn 24-24. 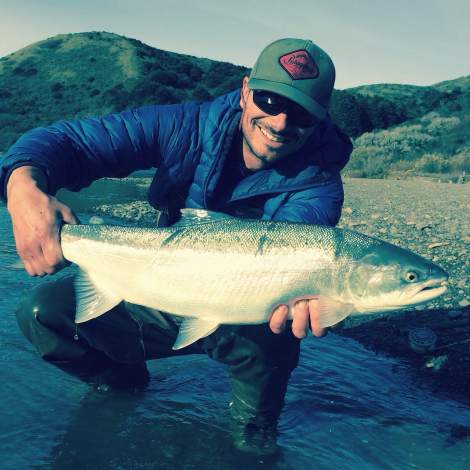 Get busy while you can, just don’t put it on the mantle next to your regrets.